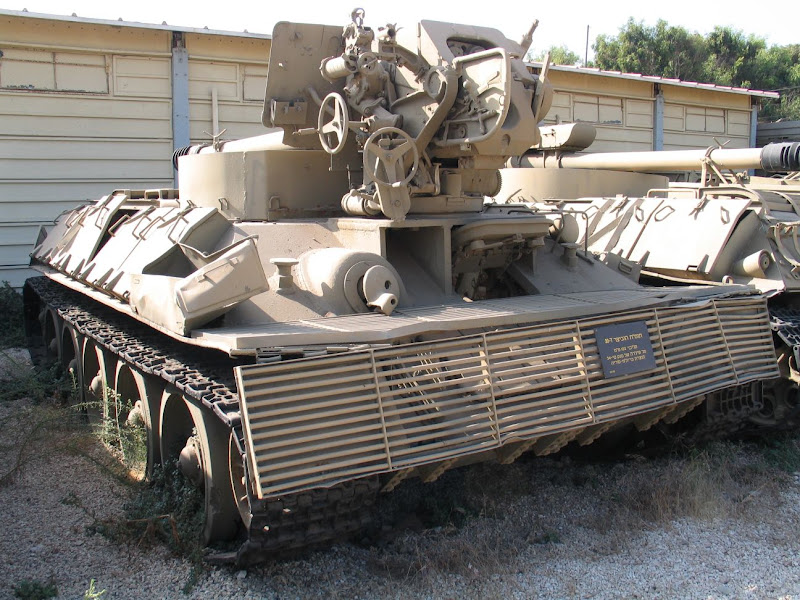 The modification of the T-34/85 to mount the 122mm D-30 field gun/howitzer is believed to have been carried out under the direction of the Vehicles Department of the General Staff. With design studies being completed by a mixed committee from both the Artillery Department and Armor Department. Although the actual work is believed to have been conducted at either the artillery school, located at Qatanah (UTM 37SBT28520378), or the Armor School, located at Al Qabun (UTM 37SBT51911567), some reports suggest that either the entire vehicle or components were fabricated in Czechoslovakia and then shipped to Syria.

Modification began with the removal of the T-34/85 turret, it’s associated equipment, ammunition racks, bow mounted machinegun, and almost all interior equipment except the driver’s position. The engine and transmission were also removed for overhaul or replacement.

Modifications to the exterior hull continued with the attachment of 10 steel ammunition boxes (5 on each side of the hull, each box can hold 4 projectiles, for a total of 40) and a 1m x 3m collapsible platform across the front fenders and hull. Following these were modifications of the hull top, consisting of a steel mounting plate welded horizontally across the top center of the glacis plate on which to mount the gun, a approximately 25-35 cm high armored shield welded around the turret ring, a series of armored louvers mounted over the intake and radiator compartment and steel “I” beams welded in front of the engine intakes. Next the overhauled engine and transmission were installed, the interior was fitted with racks for 40 cartridge cases, and collapsible benches for the crew.

Finally, the travel lock was removed from the original gun trails, reinforced and mounted on the rear engine deck and the 122mm D-30, minus it’s trail, towing lunette and lower gun shield, was attached, facing backwards, on the mounting plate. Western specialists who’ve examined the T-34/122 have stated that the overall conversion was professional looking, exhibiting a high degree of skill and workmanship (i.e., the weld joints being well fitted and clean, etc.).
...
It is believed that the T-34/122 first entered service in early 1972 with the 1st Armored Division, equipping the artillery battalions of the 91st and 4th Tank Brigades.

During the October 1973 War both the 1st and 3rd Armored Divisions were equipped with the T-34/122. Reports, however, indicate that the 3rd Armored Division was not completely re-equipped with the T-34/122 by the beginning of the war. (Additionally, 3rd Armored Division’s rocket artillery battalion had only 3 firing batteries, while the 1st Armored Division’s had 4 ). The T-34/122’s were employed primarily in the indirect fire support role. When forced, during the later phases of the war, into the anti-tank role their performance was not very satisfactory. The primary reason for the poor performance being the weapon’s overall size and the lack of crew training in the anti-tank role. The Israelis, however, have reported losing several Centurion tanks to T-34/122’s firing the BK-6M HEAT-FS rounds (the Israelis were very impressed by the capabilities of the BK-6M). During the war their mobility and reliability were particularly valuable during the Syrian advances of October 6-8, and withdrawals of October 11-17.
...
The T-34/122 was next to see operational use during the 1976 fighting in Lebanon. When elements of the 3rd Armored Division (consisting of the 20th and 65th Tank Brigades, 156th Mechanized Infantry Brigade and 13th Artillery Brigade) and the 5th Mechanized Infantry Division (Reinforced), entered Lebanon under the pretext of a peace keeping force. The T-34/122’s mobility proved to be valuable asset during the fighting in the Chouf Mountains. Only two problems were encountered with the T-34/122 during the fighting. The first, inherent in the weapon’s design, was it’s rear facing gun. This necessitated the vehicle turning around to fire, a distinct disadvantage along some of the narrow mountain roads. The second problem, having nothing to due with the weapon itself, was the low level of proficiency displayed by the Syrian artillerymen.
...
In February 1982 the T-34/122 was to see operational use when elements of the 3rd Armored Division (including the 21st Mechanized Infantry Brigade), 47th Tank Brigade (Independent), and 82nd Paratroop Regiment, were ordered into the Syrian city of Hamah (UTM 37SBU95149045) to control an uprising by members of the Moslem Brotherhood. The June 1982 War in Lebanon saw T-34/122’s of the 1st Armored Division (Reinforced) fighting in the Biqa’ Valley.
Джозеф Бермудез, Джейнз, 1985 (?), via http://www.network54.com/Forum/47209/thread/1106446166/Syrian+T-34-122+SPG+-+Development+and+Use