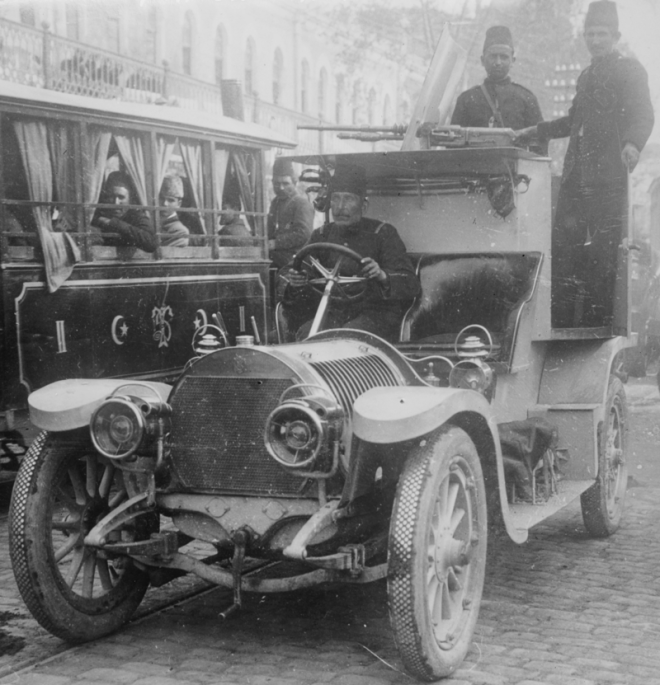 Sometime in 1909, Sultan Abdul Hamid II placed an order with the French arms manufacturer – Hotchkiss, to build four protected cars, quite similar to the 1902 ‘Charron-Girardot et Voigt Automitrailleuse’ (which had been a Paris Exhibition concept car, first displayed in December, 1902). Most references cite – ‘these cars while in transit to reach Sultan's army, were captured by the Young Turks, a revolutionary group, and used against the Sultan himself’.
...
The Turkish use of 1909 Hotchkiss 'Automitrailleuse' was very much intended for dealing with civilian unrest. For this reason, the several photographs (including one colourised photo-postcard) that exist of the four 1909 Hotchkiss 'Automitrailleuse', are pictured in the streets of Constantinople, driven and manned by Police officers, till around 1913. Beyond the photographs... nothing is actually known about these cars, how they were used or by whom... It is clear that these cars were not in service by 1914. It is likely that these cars were worn-out (similarly the French versions appeared to have had a lifespan of three to four years). As well, the experiences against the Royal Italian Army, which had used several Fiats armouer cars, as well as ‘Isotta Fraschinis’ (armouer cars) in the Italo-Turkish War in Lybia, 1911, would have demonstarated these were outdated.
http://www.ottoman-uniforms.com/the-turkish-1909-1913-auto-machine-gun-carrier/